Wallaby great David Campese has joined the chorus of disgruntled former players, coaches and supporters who are speaking out against the current state of rugby union, with Australia’s top try scorer in Test calling the game a ‘joke’ – and the numbers back it up.

A comparison between the Wallabies’ first Test of the Rugby Championship this year and a Bledisloe Cup match from 20 years ago shows an increase in penalties of almost 300%.

Other Wallabies such as Chris Latham and Will Genia, as well as former Australian and current England manager Eddie Jones, among others, expressed their frustrations during a Test season stifled by picky refereeing, contentious interpretations of the law and referrals, but no one speaks with the credibility — or passion — of Campese.

In a 101 Test career that scored a world record 64 tries between 1982 and 1996, he was considered the game’s most entertaining player; his speed, daring and “goose step” thrill crowds around the world.

A brilliant ball runner with a famous ‘goose step’ move (pictured), Campese is shattered by what he sees on the pitch now: referees blowing the pea of ​​the whistle as an endless series of penalties fussy suck the life out of the game 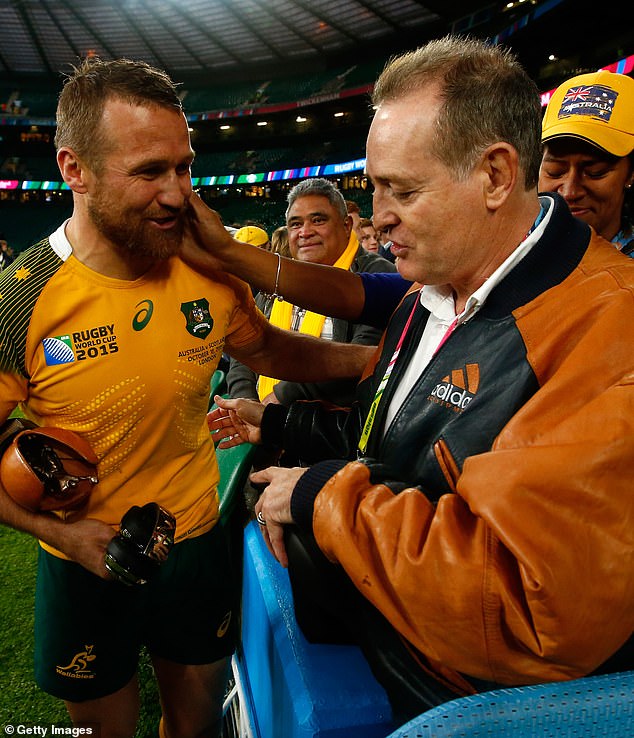 His offensive mindset at the end of a Wallaby backline that included such brilliant ballplayers as Mark Ella, Michael Lynagh, Tim Horan and Jason Little was a key factor in successes such as the Tour du 1984 Grand Slam in Great Britain and Ireland, the 1991 and 1986 Rugby World Cup, ’92 and ’94 Bledisloe Cups.

Yet now, along with other frustrated fans, Campese, 59, can only sit back and dream of the ‘good old days’ of rugby racing as the current Test matches falter from a penalty to the other.

“It’s a prank,” he told Daily Mail Australia. “Referees think they’re the most important person on the pitch. They think it’s about them, but it’s not. It’s about the game. It’s about players and fans.

“People don’t pay their money to watch a referee whistle. They are going to see a football match. They want to see tries, not penalty goals. It’s sad. As it stands, it’s a joke.

Campese says he tries to be positive about the game he loves, but it’s getting harder and harder.

“I know I’m talking about the good old days but it’s hard not to. I’m an old fart, I admit that, but I’ve always been outspoken and can’t say things are good if they are not.

“The TMO [Television Match Official] and the referees spoil the game.

While Campese’s comments may not sit well with rugby administrators, they are backed up by cold, hard statistics.

A comparison between the Wallabies’ first game of the current 2022 Rugby Championship – against Argentina in Mendoza – and the third game of the 2002 Bledisloe Cup in Sydney, paints a grim picture.

Mendoza’s game last month was punctuated by 30 penalties. By comparison, the Bledisloe game 20 years ago had just 11 penalties – with just one awarded by referee Andre Watson in the entire second half. 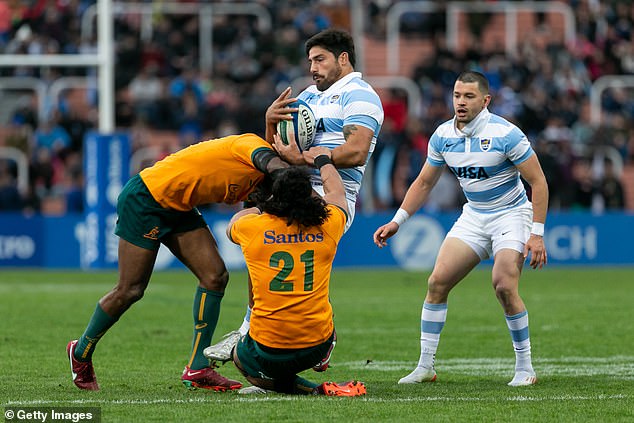 There were 30 penalties when the Wallabies beat Argentina in Mendoza on August 6 (pictured). Referee Mike Adamson in the center of attention, not the players 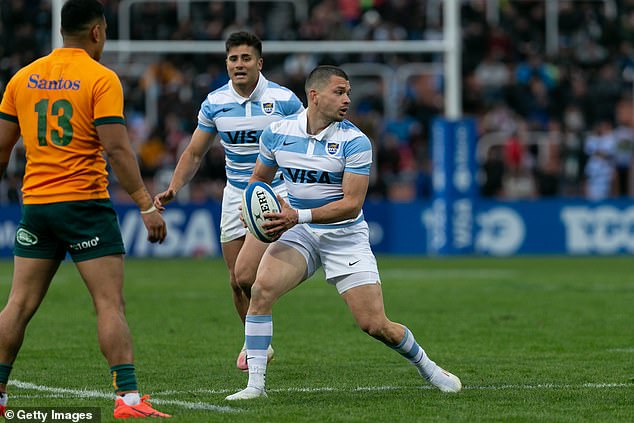 While the folks running the game from World Rugby headquarters in Dublin might use those numbers to suggest Watson had a bad night, action-hungry fans would no doubt disagree.

The only similarity between the Mendoza and Sydney games was that they both had 15 players on each side.

Scottish referee Mike Adamson, who officiated last month’s Wallabies-Argentina match, appeared to be looking for every possible opportunity to award a penalty that was about to amass 30, including a penalty try and a yellow card.

Twenty years earlier, South African Watson’s priority, as seen on a full video replay of the game, appears to be keeping the action flowing with as few interruptions as possible.

A far cry from today’s scrum routine in which the ref tells both packs to “crouch – bind – put” before the halfback puts the ball in (often followed by a slump and d ‘a penalty in the front row), Watson can be heard saying Wallaby halfback George Gregan, ‘Yeah, that’s clear, come on, put it in, hurry up’. 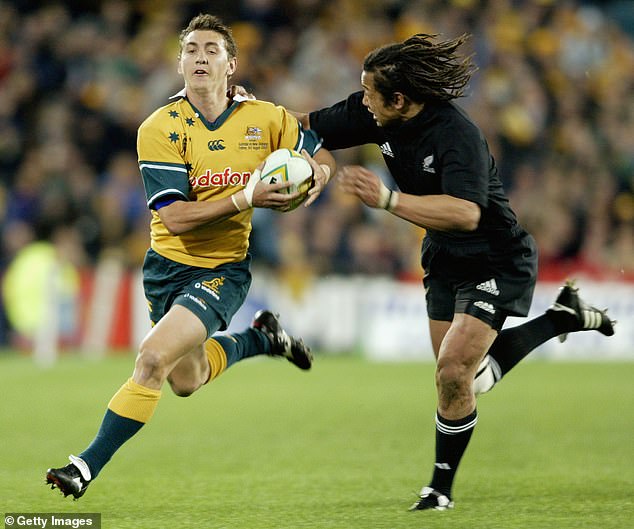 Equally inconceivable by today’s standards which recently saw South African half-back Faf de Klerk condemned for slapping the cheek of his wallaby counterpart Nic White, was Watson’s treatment of a late tackle, high – but not dangerous – by All Black Chris Jack on Australian winger Ben Tune.

These days, the TMO would have insisted Jack was doomed, if not expelled. Watson simply called him, told him to ‘put his head in’ and awarded Australia a penalty.

Such common sense arbitration is only a vague memory. Incidents such as the White-de Klerk debacle, the sin of two players for interception attempts during the second Australia-England Test in July and the farcical scenes during the All Blacks-Ireland game the same weekend, have prompted current England manager Eddie Jones to call for action. 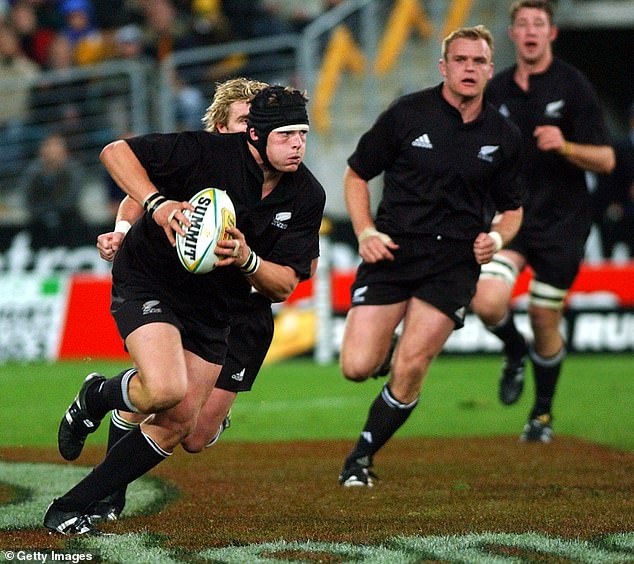 Richie McCaw charges it for New Zealand in the last-minute loss. Referee Andre Watson’s priority was to keep the action going. Its current counterparts do the exact opposite.

“The game got out of control,” he said at the post-match press conference. “We saw the New Zealand-Ireland test, at one point the commentators couldn’t count the number of players on the pitch. Seriously. And they had three backs filling the scrum.

As well as frustrating coaches, players and supporters, over-officiating has made rugby the laughingstock of other codes.

Pushing back against a $2million-a-season bid by rugby union to poach rugby league star Joseph Suaalii, NRL boss Peter V’landys said he doubted the 19-year-old years to defect “because he would be bored”.

“Right now in rugby union the ball is in play for 33 minutes per game whereas in rugby league it is in play for 55 minutes,” he said. “Joseph better have something to do for those 22 minutes a game. Maybe he should get his cell phone out and see what’s going on. Maybe he could do some social media posts .

V’landys was joking, but Campese sees nothing funny in the current state of the game he has dedicated his life to.

A man who was never late to speak his mind, his review of the game saw him seen as a troublemaker in many high profile circles.

“I would love to be asked to help fix the game, but nobody wants to listen,” he said.

‘It’s hard to take. I’m respected everywhere I go in the world, but not in my home country.

“My poor wife. She said to me, “Why are you doing this to yourself? Why don’t you go away?” I tell him I can’t. I like rugby. That’s all I know.