In the smartphone industry, a year is both long and short. This means that a lot can happen in a year and nothing can happen in a year. Time for smartphone brands is like a torrent, if you don’t move forward you will go backwards. This is true for most smartphone brands, especially for manufacturers in a very competitive environment. Recently, Chnbrand, China’s leading brand rating and consultancy agency, released China Customer Satisfaction Index 2022 – Mobile Phone Satisfaction Ranking. Mobile China found that user satisfaction with Chinese mobile phone manufacturers has changed significantly. However, the significant changes have only happened for two years

Apple, Huawei and Xiaomi are the top three brands with the highest customer satisfaction (C-CSI). The C-CSI scores for these three brands are 86.2, 85.5 and 83.1 respectively. Comparing this top three ranking to that of 2021, there are no significant changes. However, looking at the 4th – 9th ranking, there are a lot of changes. OPPO directly moved up 4 places to rank fourth; Honor drops 1 place to fifth while iQOO and Redmi are newbies on the list, ranking sixth and seventh respectively. Vivo and Samsung respectively lose 3 and 2 places to rank eighth and ninth respectively.

The C-CSI score is judged based on three dimensions, including “Customer Loyalty”, “Overall Satisfaction” and “Factor Satisfaction”. In the competition between Apple, Huawei and Xiaomi, Apple’s customer loyalty score reached 86.8. This is much higher than Huawei’s 81.0. However, in the other two aspects, Apple scores 87.4 points and 84.6 points respectively, which is lower than Huawei’s 88.0 points and 85.3 points. So, comparing Apple to Huawei, the latter is inferior to the latter only in terms of user loyalty.

Third-ranked Xiaomi user loyalty is even worse, with a score of 76.3 points, and the other two scores are 86.6 points and 83.9 points respectively. From the ranking, we can see that overall customer satisfaction with Xiaomi smartphones is high. In addition to Xiaomi, OPPO user loyalty also exceeds 70 points, specifically 72.2 points. Moreover, the overall satisfaction score also reached 82.2 points, leaving the other mobile phone manufacturers on the list behind.

Evolution of smartphone customer satisfaction ranking over the last 3 years

For reference, the top nine brands in terms of mobile phone satisfaction in 2021 are Apple, Huawei, Xiaomi, Honor, Vivo, OnePlus, Samsung, OPPO and Meizu. The top nine smartphone customer satisfaction rankings in 2020 are Huawei, Apple, OPPO, Samsung, Vivo, Xiaomi, Meizu, Honor and Lenovo. We can consider 2021 as the year of the “rise” of Xiaomi and Honor. Compared to 2020, Xiaomi and Honor will climb 3 and 4 places respectively in the satisfaction ranking in 2021. 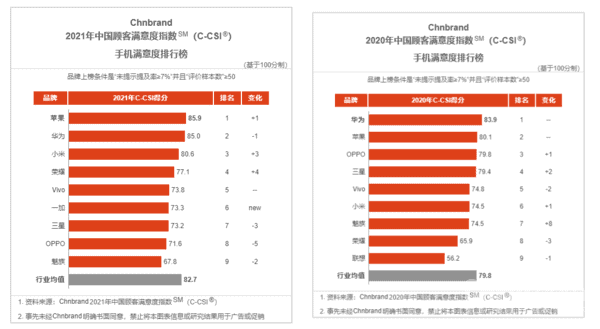 To sum up, Apple and Huawei have held the #1 and #2 positions for three years. Both brands record very high and stable user satisfaction. Xiaomi has been in the top three for two years. OPPO has had its ups and downs, but its strength is still there. Honor has “counter-attacked” while Samsung and Meizu are not as good as a year earlier.

In 2015, Chinese mobile phone brands experienced slow growth where many brands were restocking. The penetration rate of smartphones among large Chinese consumer groups tends to be saturated, and the demographic dividend of smartphones is disappearing. In 2015, the top 6 mobile phone brands in Chnbrand’s Smartphone Customer Satisfaction Ranking were: Apple, Xiaomi, Samsung, Nokia, Huawei and Lenovo. At that time, Apple’s Customer Loyalty, Overall Satisfaction, and Satisfaction Factor scores were 84.8 points, 74.7 points, and 70.0 points, respectively. Xiaomi’s were 77.2 points, 70.2 points and 61.6 points respectively.

However, in 2016 Huawei started to fight back, and 2016, 2017, 2018 and 2019 were four years of fulfillment. In 2016, a total of 18 brands entered the customer satisfaction ranking. These are Apple, Huawei, Samsung, Xiaomi, LG, Vivo, Sony, Nokia, Motorola, OPPO, Meizu, Lenovo, Gionee, ZTE, Tianyu, HTC, Haier and Coolpad. Facing fierce competition, although Nokia and Lenovo scored higher than the previous year, their rankings were down.

In 2017, it was even more exaggerated, with a total of 24 models on the list. In order: Huawei, Apple, vivo, Samsung, Honor, LeTV, OPPO, Xiaomi, Meizu, LG, ZTE, Gionee, Sony, Nokia, Lenovo, Motorola, TCL, Duowei, Haier, Tianyu, Changhong, HTC, Coolpad and Phillips. This year, many brands have popped up everywhere. Honor and LeTV performed well for the first time on the list; Vivo, OPPO and ZTE continued to rise; Xiaomi, LG, Sony and Nokia continued to decline.

In 2019, Vivo, Honor, Motorola, Nokia, ZTE and other brands made great efforts, and their rankings climbed one after another. This year, the top 10 brands were Huawei, Apple, Vivo, OPPO, Honor, Samsung, Xiaomi, Lenovo, Sony, Philips, etc., which are basically familiar brands.

In 2020, Meizu has made efforts to enter the top 10. The mobile phone manufacturers ranked 1 to 9 are: Huawei, Apple, OPPO, Samsung, Vivo, Xiaomi, Meizu, Honor and Lenovo.

In 2021, Honor and Xiaomi continue to exert their efforts and enter 3rd and 4th place respectively. By 2022, these cross brands will barely be visible on the list. Even sub-brands of major manufacturers such as iQOO and Redmi have started to enter the list.

From 2015 to 2022, the mobile phone market has gradually stabilized, and “the strong are always strong”. Sub-brands launched by major manufacturers have also started to “pay off” and gain market awareness. But will this situation last for long? Not necessarily.