In the Guidewheel system, simple current transformers (amperage sensors) clip around power cords to sense the â€œheartbeatâ€ of the machine. They can be used to detect uptime, downtime, cycle time and more.

The great history of the â€œIndustrial Internet of Thingsâ€ (IIoT or Industry 4.0) is much more than the simple ability to acquire, analyze and communicate data from production systems, it is also the â€œ rapid democratization â€of this technology, making it available to manufacturers of all sizes, not just the largest companies with big budgets, large engineering teams and long lead times for training and installation.

â€œOur biggest impact is reducing unplanned downtime and speeding up changes and configurations. “

A new player in this democratization effort is a San Francisco company founded three years ago called Guide wheel (guidewheel.com). The company’s website states that its â€œmission is to enable all factories around the world to achieve sustainable peak performance. Our plug-and-play FactoryOps platform makes the power of the cloud accessible to any factoryâ€¦ to unlock big wins immediately.

“Any factory” means not only of any size, but with all types of machines, new or old, continuous or cyclical. Guidewheel already serves customers in the plastics and packaging industry, across a wide variety of industries. According to CEO Lauren Dunford, one blower tried Guidewheel’s technology in a few factories and, after a few months, extended it to 17 more.

And “right now” can mean in one shift. What about these â€œbig winsâ€?

Dunford responds to this with all the enthusiasm of a tech startup leader: â€œIn an environment of increasing pressure and uncertainty, every manufacturer must make the most of the equipment they have. Now any factory can connect all of their machines to immediately identify and take action to improve. She adds, â€œWe are looking to get manufacturers out of a firefighting mindset and be proactive. Our biggest impact is reducing unplanned downtime and speeding up changes and configurations.

Based on proven technology

What makes all of this possible is a new application of simple technology: the current transformer, essentially an ammeter. As Dunford explains, maintenance engineers have used these small, inexpensive devices for decades to detect, for example, when a machine begins to draw excess power, possibly indicating a need for maintenance or even impending malfunction.

The guide wheel uses the same information to detect when a machine is on or off, how long it has been running or not, and the number and period of cyclic operations. In the case of continuous operations such as extrusion, the level of current draw can be correlated with the production rate.

Remote support and training allow users to get the system up and running in minutes.

FactoryOps, as Guidewheel puts it, is â€œinspired by the simple, universal truth that every machine in the factory has a power cord. The guide wheel clips onto any machine to transform its real-time â€œheartbeatâ€ into a connected, active-learning system that enables teams to reduce downtime, increase throughput and to function better and better over time.

With Guidewheel’s Quick Start package, customers can start with a 1: 1 video call, after which Guidewheel sends out a sensor box and communication hub. Customers can install the sensors themselves in minutes by simply clipping them around the power cord of their machines. The sensors plug into a hub, which collects data from the sensors and contains a router that sends the data to the cloud via WiFi, Ethernet or LTE (4G mobile) access. Each hub can connect to 15 machines within a radius of 30 meters. 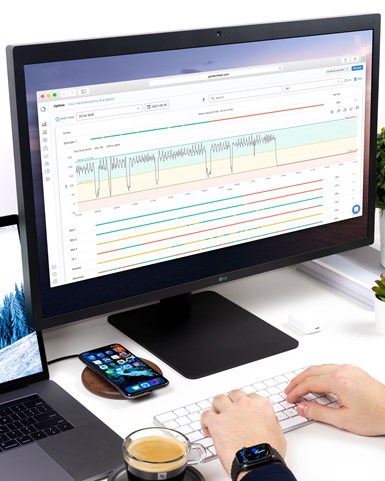 During a shift, the guide wheel system â€œlearnsâ€ the current conditions for a machine running under load, dry running and paused. Shown here: current tracking of an extruder.

Remote support and training allow users to get the system up and running. FactoryOps software tracks current fluctuations in connected machines during typically a shift, to â€œlearnâ€ benchmarks for load operation, dry cycle or dry run, and shutdown. Users have access (by phone, tablet or computer) to a password protected site with a personalized dashboard of operating data. Initially, the dashboard can provide uptime statistics: runtime for each machine, configurable idle time, and offline thresholds. With manual entry of production data, Guidewheel calculates performance statistics based on actual production versus potential production based on pre-set machine productivity goals and runtime. In addition, manually entering data on good production or scrap metal allows Guidewheel to calculate quality metrics. With all of these uptime, performance and quality statistics, Guidewheel can automatically calculate the OEE (Overall Equipment Efficiency).

Additionally, Guidewheel can automatically send SMS or email alerts if a machine violates pre-set limits for production speed or idle time. This allows managers and production staff to take care of issues as they arise, rather than wasting valuable production time while a machine lies idle and ignored.

Guidewheel users have internet access to a personalized dashboard and receive automatic alerts when the system detects anomalies such as a machine shutdown or changes in operating speed or cycle times.

Dunford describes Guidewheel as aimed at mid-size manufacturers, but in fact it could benefit stores of almost any size. As mentioned earlier, a snowblower with 19 factories installed Guidewheel in each factory. Dunford says his company also has customers who monitor one or two large, high-output machines. She says, â€œIf you only have a few machines and you can easily monitor them all, you might not need our system. But no matter how many machines you have, if you feel the pain of losing potential income, we can help. She notes that Guidewheel can monitor not only primary production machinery, but also ancillary or downstream equipment, anything slowing down or shutting down would threaten the profitability of the plant if it went unnoticed.

Here are some real-life examples of customers who have taken advantage of using Guidewheel to provide execution tracking, alerts, and real-time visibility into machine activity:

â€¢ A factory with 30 extruders and thermoformers reduced production costs by 20%.

â€¢ A manufacturer of plastic tanks uses Guidewheel on 15 extruders, grinders and rotational molding machines. The company achieved 37% to 62% reductions in downtime on key machines and increased plant uptime by 18% overall. The TRS has improved by 41% in six months.

â€¢ A packaging manufacturer uses Guidewheel on its most important machines and is now expanding to nine locations. He identified and eliminated 1-3 hours / day of avoidable downtime on each machine.