AT&T is the second largest carrier in the United States and has many interesting projects for everyone. But like all carriers, their plans can be quite confusing. So to help you figure out which AT&T phone plans are the best in 2022, we’re here to help. As the last thing you want to do is pay for a plan that doesn’t meet your needs.

In this article, we are going to review the best postpaid plan, the best plan for travelers, the best prepaid plan and much more. So there’s something for everyone here, and you can make sure you’re getting the right plan without worrying about paying extra. AT&T also includes certain perks with most of its postpaid plans, which we’ll also detail here. Remember that HBO MAX is owned by AT&T, so it’s included in some of its plans.

Postpaid vs Prepaid vs MVNO

Before we start, it is important to talk about the differences between Postpaid, Prepaid and MVNO. Postpaid services are customers who pay for their service after receiving it. This means your final bill will be higher than your first bill. Prepaid basically means that you pay for your service before you receive it. And MVNO stands for Mobile Virtual Network Operator, they basically buy network access from AT&T at wholesale rates. That’s why it can be much cheaper than getting a postpaid plan.

As for coverage, all three will offer the same coverage, if they are on the same network. The difference here is going to be in the occupied areas. On a network tower, postpaid customers are given priority, followed by prepaid customers. MVNO customers are all the way down, but an AT&T-owned MVNO might be a bit higher than other MVNOs because it’s still an AT&T company. Cricket is owned by AT&T.

Smartphone selection is another difference here. While postpaid customers have access to almost every smartphone available, prepaid and MVNOs have far fewer options for customers. Also, they usually don’t offer any financing, so you have to go through a third party, like Samsung (and buy unlocked).

Now that you know the difference between postpaid, prepaid, and MVNO, let’s get started. 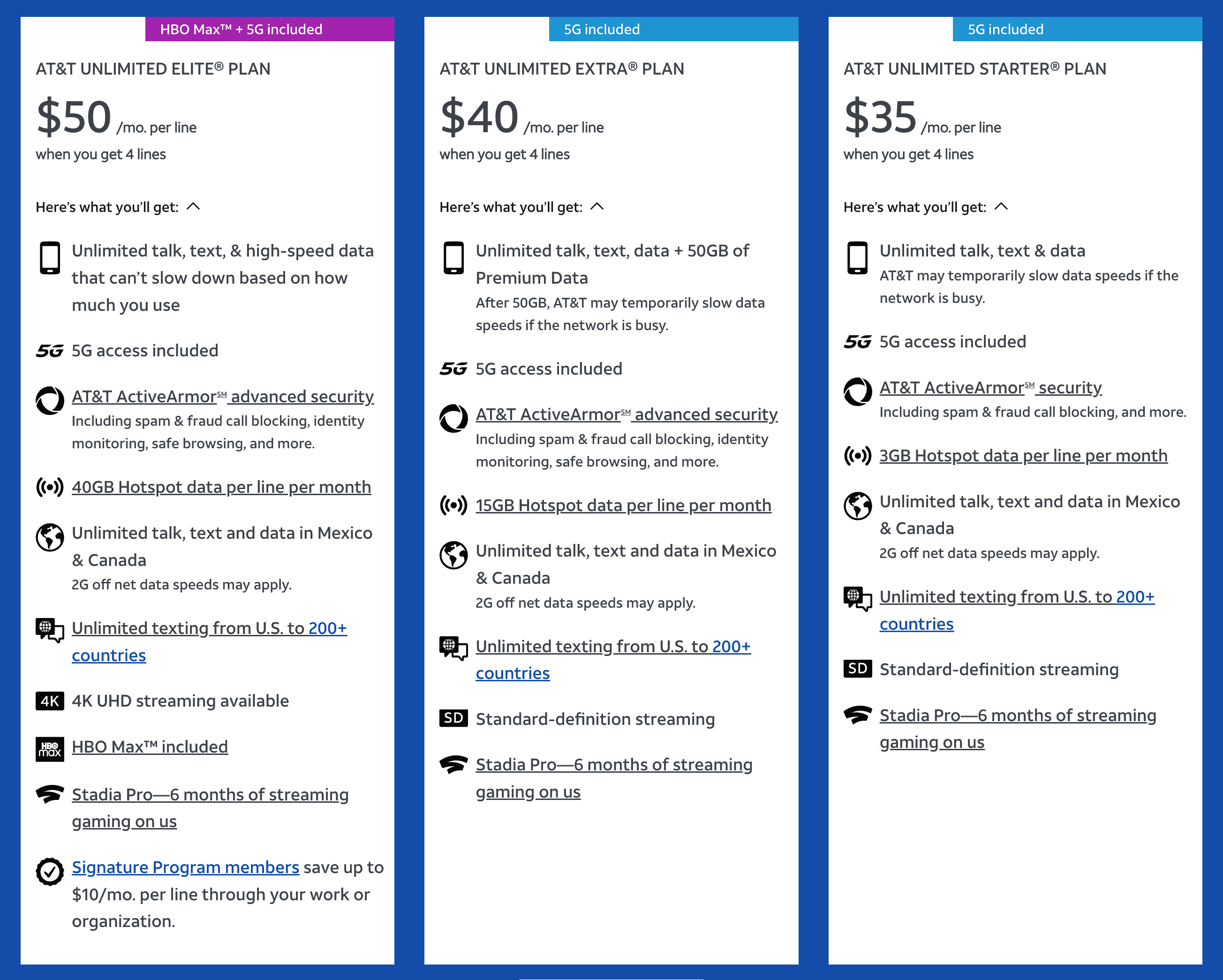 The best overall plan at AT&T for postpaid customers will be the Unlimited Extra plan. This plan will cost you $75 per month for a single line. Or for a family of four lines, just $40/month/line.

This plan offers quite a bit. For example, you get unlimited calls, texts and data with up to 50 GB of premium data. This means that after using those 50 GB, you may be throttled. On top of that, you get 15 GB of hotspot data per line per month. Which is really useful in a pinch.

AT&T also offers unlimited calls, texts and data to and from Mexico and Canada. With unlimited texting from the US to over 200 countries. Finally, AT&T will give you six months of Stadia Pro with this plan – it’s Google’s cloud gaming service. AT&T Active Armor advanced security is also available, which will help block spam and fraudulent calls, monitor identity, browse safely, and more. 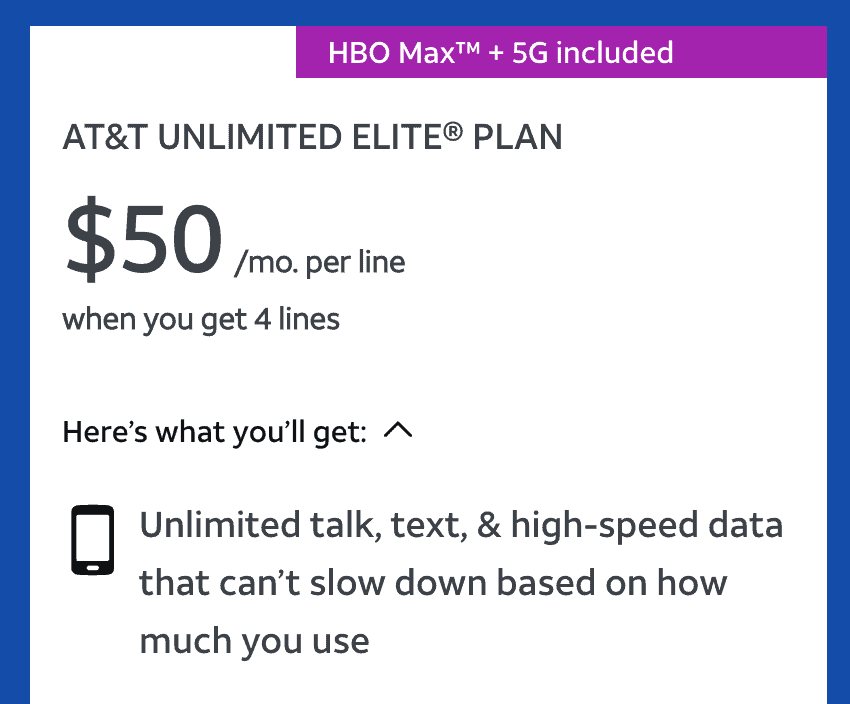 The Unlimited Elite plan is the most expensive plan at AT&T, but for travelers, it’s the best. It will cost you $85/month for a single line, or as low as $50/month/line with four or more lines.

This plan offers unlimited calls, texts and data. It really is unlimited data, because you won’t be slowed down. According to their website “Unlimited talk, text and high-speed data that can’t slow down based on your usage.” So you won’t be restricted, but if you’re in a crowded area, you might experience a slower network due to congestion. AT&T also includes 40 GB of hotspot data per line per month.

As with the Unlimited Extra plan, you also get unlimited calls and texts to and from Mexico and Canada. With unlimited SMS to over 200 countries. But there are a few other benefits included here. You also get six months of Stadia Pro included, as well as HBO MAX, and you can watch content in 4K on its network. While other plans are limited to SD. 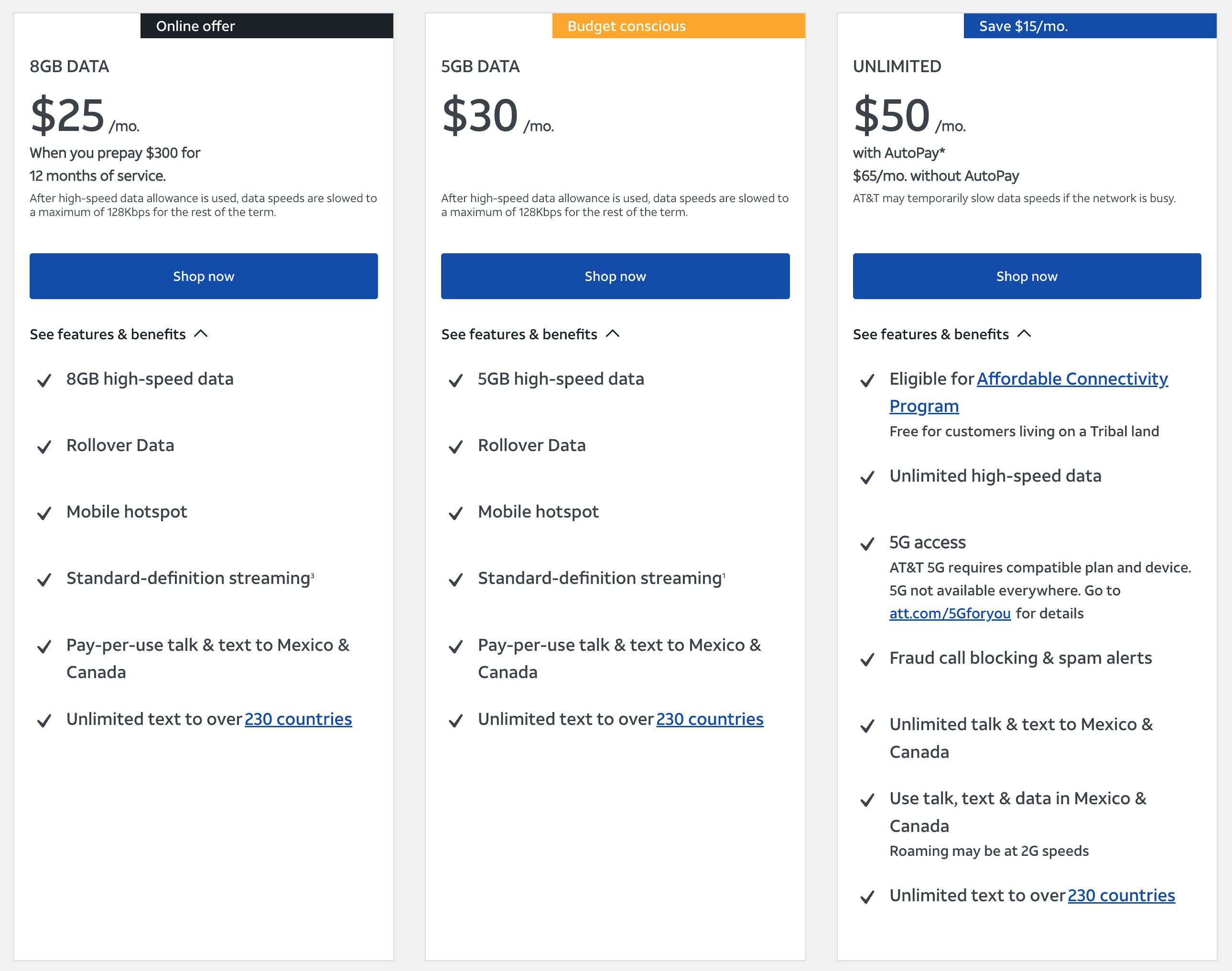 AT&T Prepaid offers three plans, and we think the 5GB data option is best for most people. It’ll cost you $30 a month, which isn’t bad for cell service.

With this plan, you will get 5 GB of high-speed data, limited thereafter. You also get unlimited calls and texts. Mobile Hotspot is included and uses data from your 5GB cap. AT&T offers rollover data, so if you haven’t used all 5GB this month, whatever’s left will rollover to the next month. This can be very useful for months when you don’t leave the house much and can use this data for months when you travel a lot.

Calls and texts to Mexico and Canada are chargeable, but you get unlimited texts to over 230 countries with this plan. 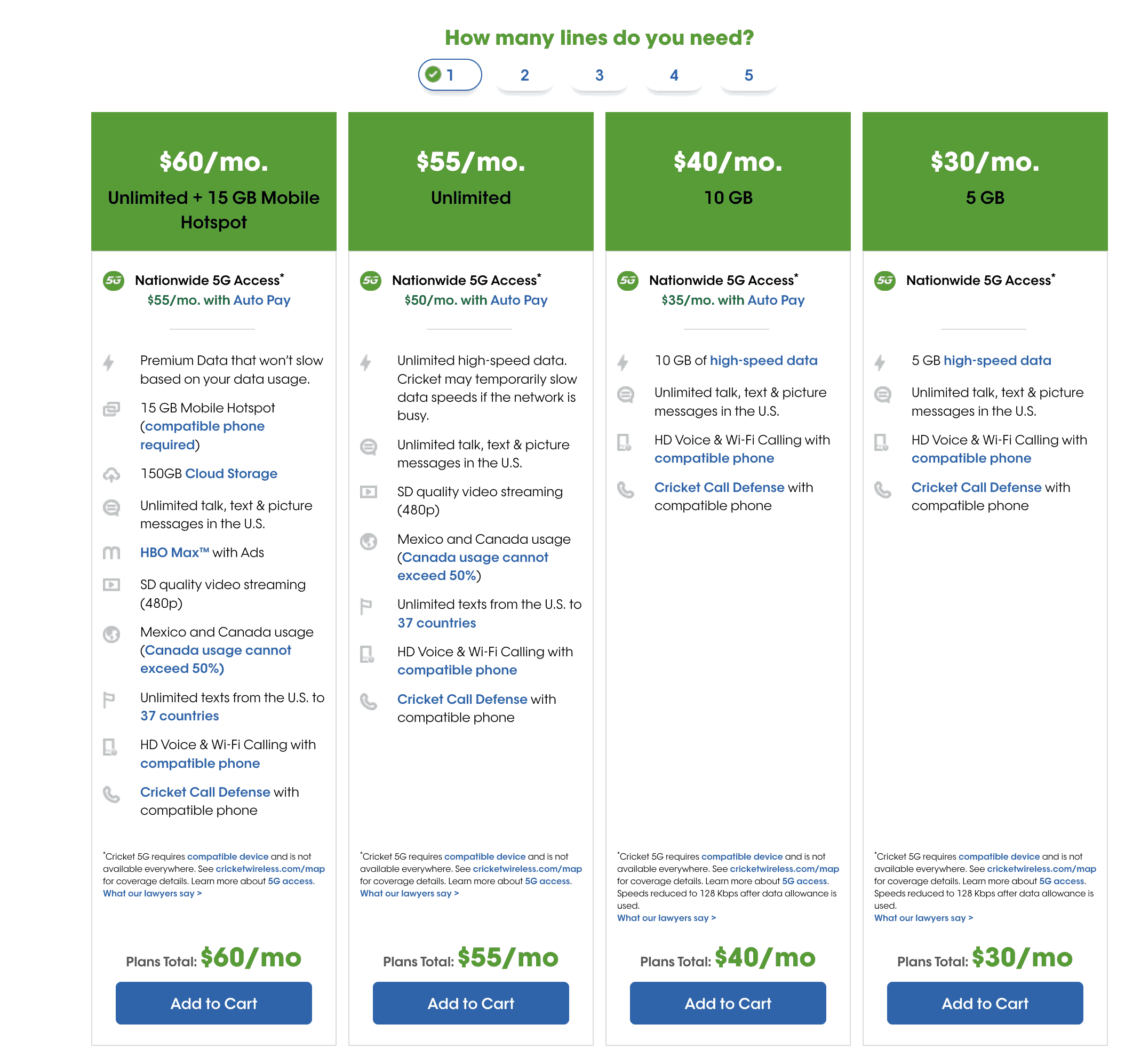 This plan offers unlimited high-speed data and has access to its nationwide 5G network. However, you can be strangled in congested areas. There’s also unlimited chatting and texting. The video will be streamed in 480p or SD quality.

With this plan, you can also get unlimited calls, texts and data in Canada and Mexico. Cricket Wireless notes that your usage in Canada cannot exceed 50%. There’s also unlimited texting from the US to over 37 countries, plus HD voice calling and WiFi available.

If you don’t need unlimited access to Cricket Wireless, 5GB and 10GB plans are available for $30 and $40 per month, respectively. While they don’t include use in Mexico and Canada, they also don’t include texting to 37 countries.